Plants collected on this Expedition

In late summer 2018, Kyle Port, Manager of Plant Records, and Terry Huang, Living Collections Fellow, journeyed to the Pacific northwest to gather seeds, fruits, and herbarium specimens as a part of our Campaign for the Living Collections.

Starting in far southern Oregon, they worked their way north to Washington, collecting on both private and public land including state and national forests. They were careful to obtain any required collecting permits before beginning. In one week, they made 39 collections of 34 different taxa of plants, and traveled over 1,366 miles.

The captions for the illustrations in this article have additional narrative of Kyle and Terry’s trip. All quotes in the text are by Kyle Port.

Laden with plant press, collecting bags, bug spray, and a long list of other necessary items, Kyle and Terry arrived in southern Oregon to begin a week of plant collecting.

Their first stop was in Josephine County in far southern Oregon, where they collected germplasm from nine different taxa of plants, including the vine maple (Acer circatum), California incense cedar (Calocedrus decurrans), and the Pacific dogwood (Cornus nutallii), all shown in the photographs below. Other collections that day included the big leaf maple (Acer macrophyllum) and the creamy flowered ocean spray (Holodiscus discolor).

Our collectors moved on to Jackson County, Oregon, in the Rogue River–Siskiyou National Forest the next day. In spite of difficult traveling, eight plant taxa were collected that day including specimens of the stately Ponderosa pine (Pinus ponderosa), and western white pine (Pinus monticola), but seed bearing cone from the largest of the pines continued to elude them. 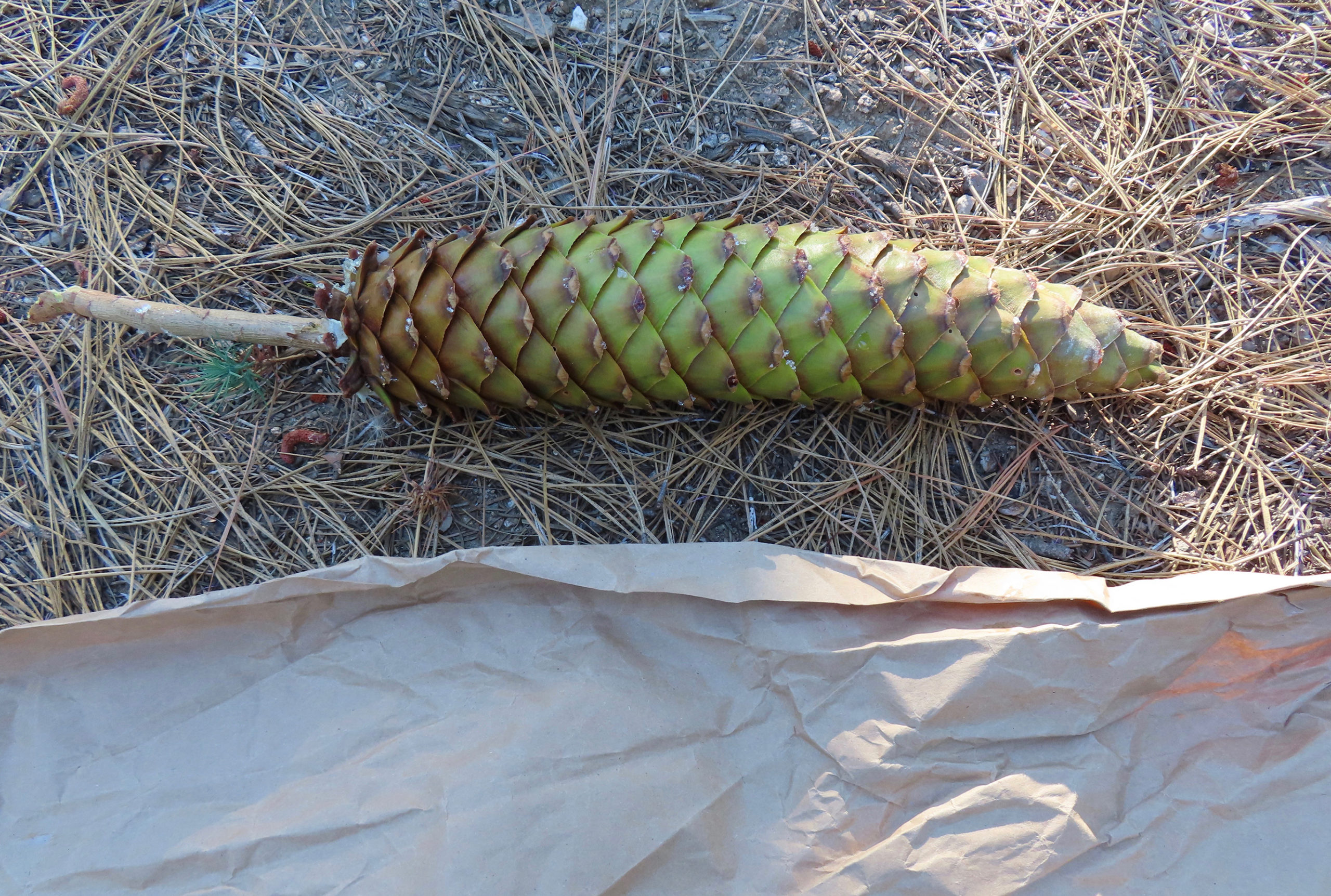 Of our many collections, we are most pleased to bring back Pinus lambertiana (sugar pine), the largest pine in the world. This sugar pine cone will be wrapped in butcher paper in preparation for its long journey to Boston.

The next day, our collectors started their long drive north towards Prineville, Oregon, making several stops along the way for plant collecting.

From Prineville, Oregon, Kyle and Terry drove to the Ochoco National Forest in search of their quarry, the western larch (Larix occidentalis), and then on to the Mt. Hood National Forest, where they located bunchberry (Cornus unalaschkensis). An important collection was that of Pacific yew (Taxus brevifolia), which can be difficult to collect.

If it’s Tuesday, it must be Mt. Hood! Kyle and Terry continued their successful collections with a bumper day in the field. “Our collecting site along the Clackamas River yielded the most target taxa of any area on this expedition. These species include: Acer circinatum (vine maple), Acer glabrum (Rocky Mountain maple), Philadelphus lewisii (mock orange), Tsuga heterophylla (western hemlock), and Viburnum ellipticum (oval-leaved viburnum).”

After an evening of rest Kyle and Terry made an early start on their most ambitious collecting day of the expedition. Kyle narrates, “Our ascent to Icicle Ridge will begin on the Fourth of July Trail, which switchbacks through swaths of forest burned in 2017. Our aim is to reach Pinus albicaulis (whitebark pine) and Larix lyallii (alpine larch), which have been untouched by fire. These very populations are found at elevations above 6,000 feet and our National Forest collaborators have assured us that we will find them there.”

“At 6pm, we finally returned to the moist valley below with the sun just beginning to set. From mountain shadow to mountain shadow, we wish you could have joined us for this memorable hike. Our trip ends tomorrow and we look forward to sharing more stories with you in the days ahead,” said Kyle.

Kyle and Terry’s last day on the 2018 Oregon Washington Expedition was spent on the road to Seattle and their flight home, but they left time for a little bit more botanizing along the way.

What happens to all the seeds?

All the plant material collected during the 2018 Oregon Washington Expedition was sent to our propagation facility, the Dana Greenhouses, located on the grounds of the Arnold Arboretum. If there was plant material still attached to the seeds, they were cleaned, and any cone or casings removed.

In the photograph on the right, seeds are being removed from a dried sugar pine (Pinus lambertina) cone. After they are removed, the seeds are counted, divided into lots, and placed in the small manila envelopes seen at the top right of the picture.

The envelopes will be labeled with the Latin plant name, or binomial, accession number, expedition name, and seed count. This photograph shows completed packets with their accession cards. From the moment it is collected, every piece of information about a seed or specimen is recorded for entry into BG-Base, our plant information database, a system used by the Arnold Arboretum and many other botanic gardens and arboreta for recording information about their plants.

You can learn more about what goes into planning and executing a plant collecting expedition in The Arnold Arboretum Expedition Tool Kit: A Reference Manual for Expedition Plant Collectors.